Sacramento, CA…Governor Gavin Newsom hosted a roundtable discussion at Los Angeles Southwest College with young adults to talk about their health care challenges. He spoke with an undocumented student who delayed seeking medical care for stomach pain, had his appendix removed and was unable to secure follow-up visits, making his condition worse. A young professional on her parents’ health insurance discussed her fear of losing coverage once she turned 26.

The Governor’s proposal would offer financial help for many young adults when they go off their parents’ plan and allow full-scope Medi-Cal coverage to any qualifying young adults up to 26 years old, regardless of immigration status.

“Young people feel the crunch of the cost crisis acutely – from high rents and student debt. Health care shouldn’t be one more worry,” said Governor Newsom. “While the White House tries to rip out the Affordable Care Act root and stem, California is taking a fundamentally different approach. We are helping young adults when they come off their parents’ plan and assisting those who may not be able to join onto a parents’ insurance policy.”

Just moments after being sworn in, Governor Newsom launched a series of first-in-the-nation actions to make health care more affordable for all Californians and to move the state closer toward the goal of health care for all. Those proposals included an executive order to create the nation’s biggest single-purchaser system for drugs and to, ultimately, allow all Californians and private employers to sit together at the bargaining table across from big drug companies when negotiating prescription drug prices. 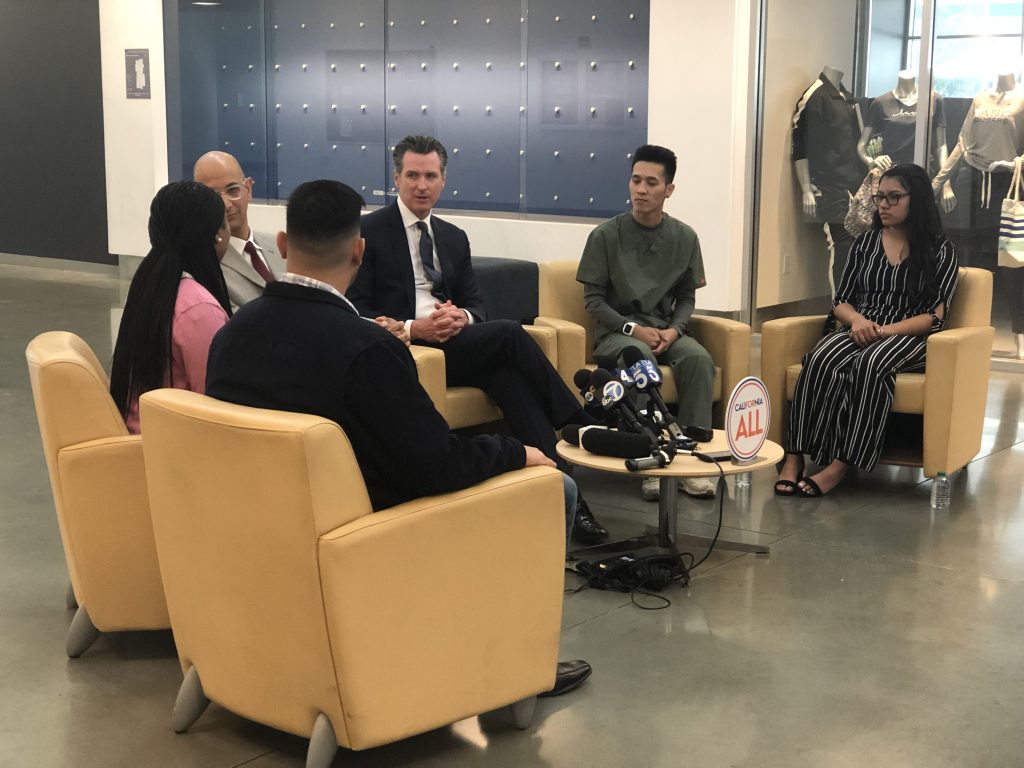 The roundtable was part of the Governor’s “California for All” Health Care Tour. A week after he released his revised budget that advances these priorities, Governor Newsom is taking his proposals on the road as part of the statewide tour launched Tuesday in Sacramento. The Governor is traveling across the state this week hosting events that highlight how the health care initiatives in his budget proposal would help families meet their health care challenges. Each event will focus on one of the proposals in Governor Newsom’s health care package and the tour features events in San Francisco, San Diego, Los Angeles and Sacramento.

Governor Newsom’s health care proposals are a central pillar of his broader “California for All” agenda. The Governor believes that the California Dream should be accessible to everyone – not just a privileged few, and the crushing crisis of affordability and rising cost of living are limiting families’ ability to get ahead.

Recent data shows that health care and prescription drugs are chief among those concerns for California families. Those buying on the individual market will see an average 9 percent rise in health care costs this year, according to Covered California. American families have seen their prescription drug costs nearly double since the year 2000, according to the Kaiser Family Foundation and prescription drug pricing is one of the largest drivers of rising health care costs. In January, a Reuters report found 30 drug manufacturers that did business with the State of California planned to raise their prices in January.

The Washington Post editorial board wrote Governor Newsom’s proposals “would make his state a leader in resisting Republican efforts to unravel the Affordable Care Act,” noting that “Mr. Newsom’s plan is a promising reform that other states – and, if Congress and the president ever come to their senses, the federal government – should consider.” Closer to home, the East Bay Times and San Jose Mercury News editorial board called the Governor’s health care proposals “a solid step toward lowering costs, improving health outcomes and moving the state closer to universal coverage.”

Governor Newsom Promotes Health Care Proposals For Young Adults Regardless of Immigration Status added by admin on May 21, 2019 4:25 pm –
View all posts by admin →