San Luis Obispo, CA…San Luis Obispo Police Detective Luca Benedetti, a 12-year veteran of law enforcement, was shot and killed Monday while serving a search warrant at an apartment on Camellia Court, off Margarita Avenue near South Higuera Street in San Luis Obispo. The suspected shooter was identified as Edward Zamora Giron, 37, who was found dead following the incident. Detective Steve Orozco was injured and transported to Sierra Vista Hospital, where he was treated and released Monday evening. He is expected to fully recover from his injuries. 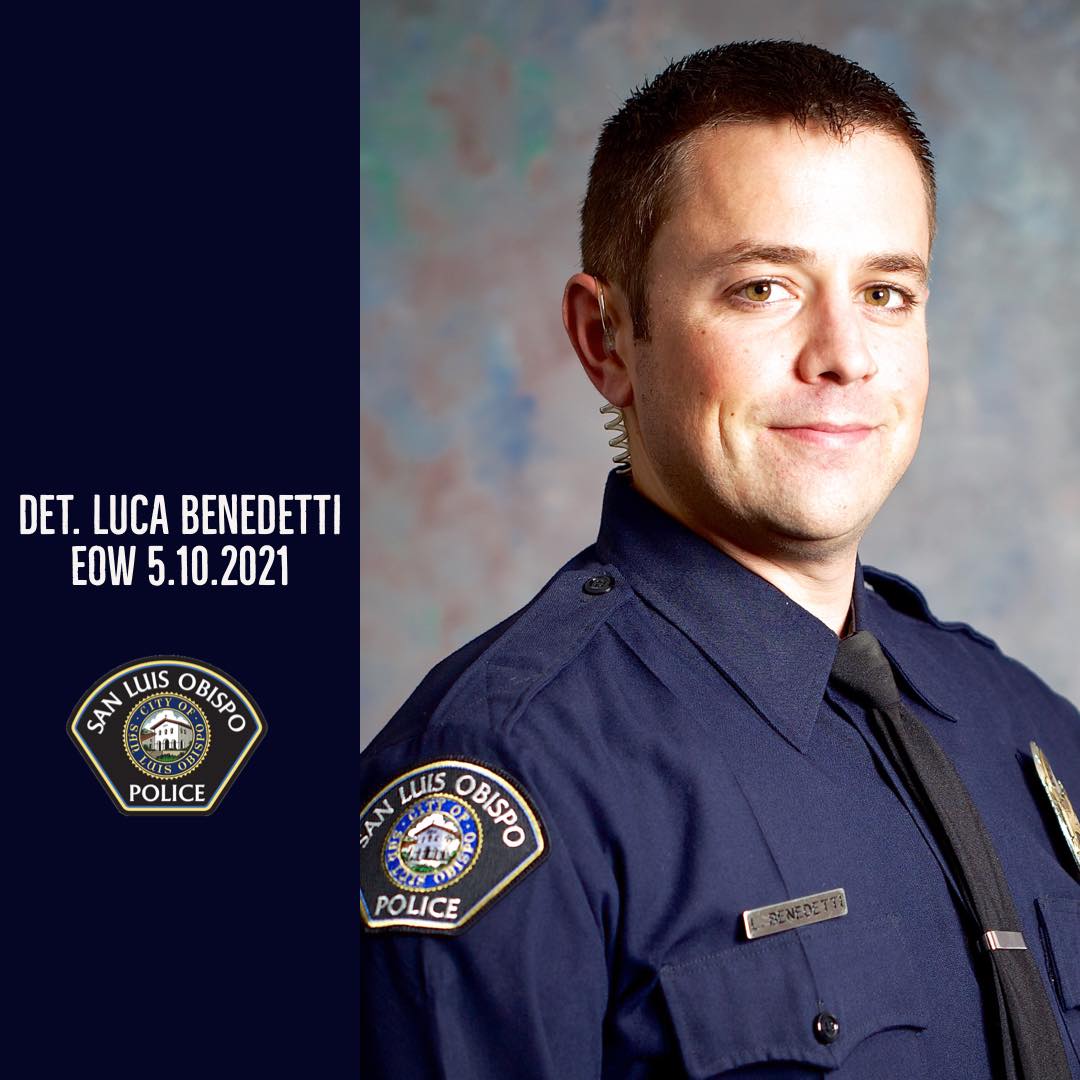 “Our community is heartbroken,” said Mayor Heidi Harmon. “Detective Benedetti loved this City and bravely gave his life so that we could live in peace and safety. Luca’s children have lost their father so we could be safe. We will hold Detective Benedetti and his family in our hearts forever.”

She also recognized the bravery of all the officers involved in this incident, especially the wounded officer. “As Detective Orozco recuperates at home, we are grateful that his physical wounds will heal, and we recognize that yesterday’s events have changed his life forever.”

At approximately 5 p.m. yesterday, six SLOPD officers served the search warrant for possible stolen property related to a series of late-night commercial burglaries that have taken place over the past week.

As the officers approached the apartment, they provided “knock and notice” identifying themselves as law enforcement as required by California Penal Code 844. After an extended period of time and having received no response, they forced open the front door. Giron was laying in wait and began to fire shots at the officers from inside the apartment. Officers’ returned fire and retreated, however the two officers were shot during the exchange of gunfire.

Giron was later found deceased inside the apartment with an apparent self-inflicted, fatal gunshot wound and other injuries consistent with being struck by the officers return fire.

The San Luis Obispo County Sheriff’s Office, in coordination with the District Attorney’s Office, will be conducting the investigation into this incident. “We appreciate their assistance through this difficult time,” said Acting Chief Brian Amoroso. “Having an outside agency conduct the investigation is a standard practice for officer involved shootings and we are cooperating fully with their investigation,” he added.

No additional details will be released by SLOPD. Any questions related to the investigation will be referred to the San Luis Obispo County Sheriff’s Department.

“I had the distinct pleasure of working with Luca over the past 9 years,” Amoroso said. “He was a dedicated officer, a talented detective, a proud member of the San Luis Obispo Regional SWAT Team, and most importantly, a loving husband and father.”

“The entire SLOPD is grateful for the outpouring of support we have received from the community,” Amoroso said. “We are also grateful for the continued support from our Central Coast law enforcement partners and beyond. The San Luis Obispo County Sheriff’s Office along with allied law enforcement agencies in the county will respond to calls for service in the City of San Luis Obispo during the coming days while members of the SLOPD grieve and work through this tragedy,” he added.